If you want to go somewhere in Britain for an activity break or for a relaxing countryside retreat, I would recommend, based as far as my experience goes, Yorkshire Dales and the small village of Malham any time. If you live in one of the more busier places in Northern England - say Manchester, York or Birmingham - it's a perfect getaway that will not cost you too much time or money and bring you some peace of mind, good beer in either one of the two village pubs and exhausted legs from a day's walking (unless you have not compensated by shoving tons of pub food down your throat).
What I love the most about this place is that it offers lots of walking opportunities and its well-designed for it: the area is clearly signed and have nice public footpaths. You can also decide on different route depending on your mood and fitness - the rewarding and not-too-hard walk up Malham Cove (popularly featured in the Harry Potter films), the gentle but longer walk to Gordale Scar or the incredibly long Pennine way who makes a visit in Malham (this is a 268-mile trail from Eadale in Peak District to just past the Scottish border). There are even more destinations for people who start to dribble every time they see a peace of lime stone or the glimmer of water, but I let you find out about them yourself by going there or google it.

Regarding sleep: The centre of the village is furnished with a YHA hostel which offers clean sheets and toilets and (from some rooms) views of a nearby goose pen. The local cockerel will wake you promptly at seven and if it's the season for it, you can enjoy a breakfast with 40-so professional cyclists in full uniform. Even though this village tends to be crowded during the summer months, you can still find some quiet and solitude by taking a stroll around the hills as soon as the sun starts to set.

When it comes to travelling, I rarely want to revisit a place since I always  want to spend my money on a new experience. I think it's a testament to how special I found this Yorkshire village that I keep thinking about going back there.

Trip made: approx. somewhere towards the end of January. The photo shows the only time the rain paused and the sun peaked through. 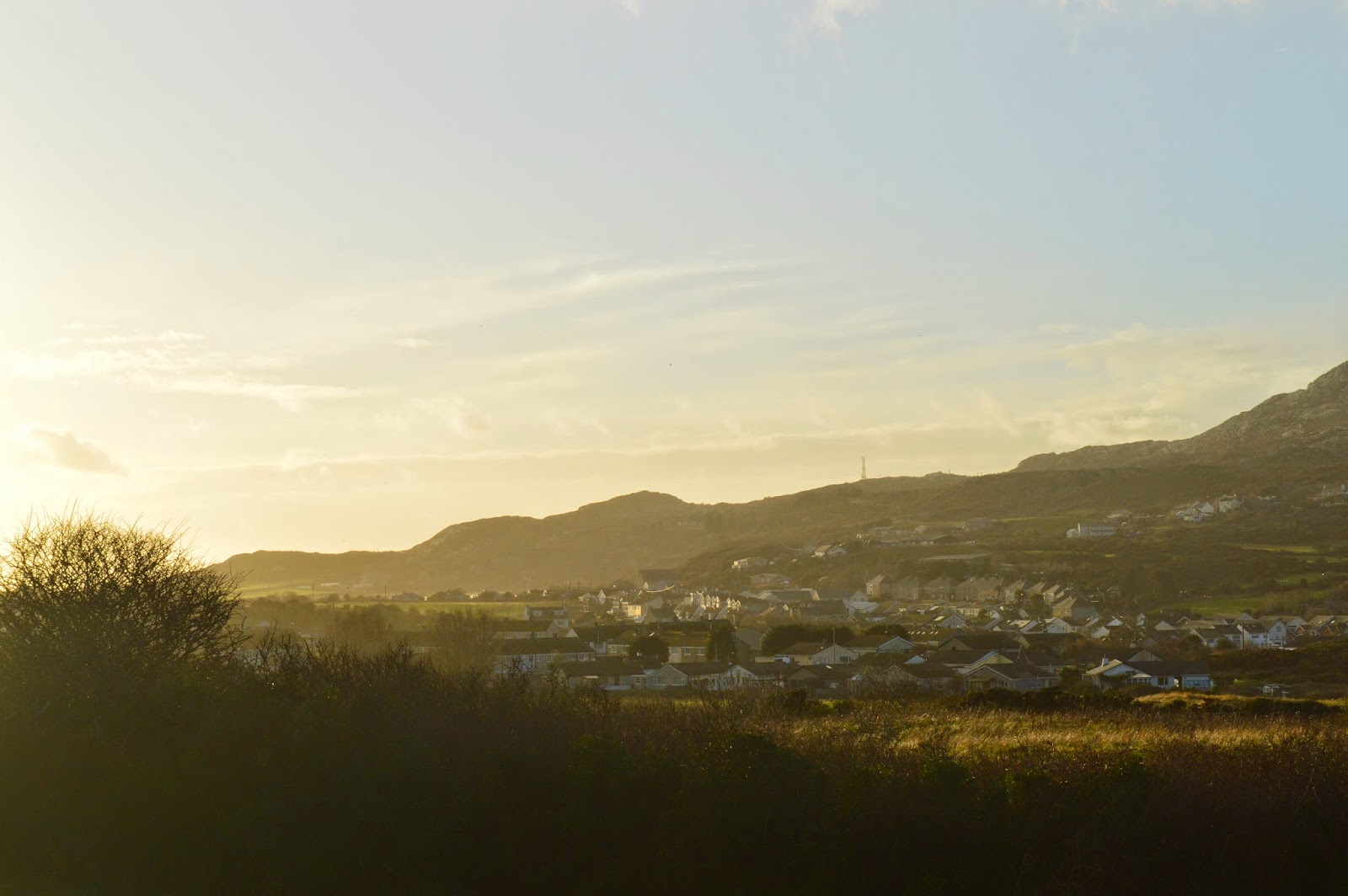 The first trip I made across the UK was characterised by rain. It was the beginning of January and it was the weekend when some parts of the UK were submerged in water to the point that some areas had become islands. Originally I'd wanted to go to Pembrokeshire, but upon realising it was 6 hours away, I went to the Welsh island of Anglesey instead. It turned out to be a lucky choice in some aspects since there were floods in Pembrokeshire. That I had chosen the less rainy part of Wales was however hard to grasp. By the end of the week, everything in my bag had turned into a soggy, damp mess and I didn't know how dry socks felt any more. It didn't bug me much, though, to be honest. The only annoying outcome was that almost all my photos give the impression that colour photography hasn't been invented yet. Tiny problem in the grand scheme of it all though.

The train ride to Anglesey is really lovely with plenty to see. During a long stretch of time, the sea could be seen from the windows of the train. The train stops at unpronounceable places along the way such as Penmaenmawr and Llanfairfechan, which I hope I will have time to visit in the future. My final stop was the port town of Holyhead where I stayed for a couple of days. Well, I essentially got stuck there - but more about that later.

Holyhead is a town characterised by its big ferries and industrial-looking port area which marks the beginning of a journey which will take you to Ireland. It seems to largely be a town where people pass through but do not stop, and especially during one of the rainiest weeks in the UK during the last hundred years, which meant I was one of the few tourists brave (read: stupid) to go there at the end of January. However, it meant quite cheap accommodation at a guest house that was nestled in among the many grey buildings that crouched along the tiny streets of this town. I still would count this accommodation, named Crossroads Guest House, as among the best I have stayed in - and very affordable. I paid 90 pound for 3 nights for a room situated at the ground floor of the house with a separate door which gave it a sense of privacy. The daughter of the owner, who was in charge there during my stay, was always ready to help but not intrusive. On the top of that, they had stocked the room with so much cereals that it would last me a month. I do prefer staying in hostels most of the time, but if you want a quiet retreat for a couple of days, this is incredibly cheap considering you get both TV, breakfast and en-suite.

That my room was so comfy would prove quite useful as I spent a lot of time there. While I spent all of my days wandering aimlessly about the town of Holyhead, I spent the evenings watching TV and reading books in my bed. I tried to cross the moor in the direction of Holyhead Mountain to go towards the famous South Stack Lighthouse a number of times but a sense of unease stopped me. I think it was the lack of other people that made me feel a bit vulnerable as I walked past derelict houses, through the grass, to the rock-lined beach. It was also probably the weather, which drenched the scene in unforgiving grey. After all - I did not feel this when I walked on my own in both Scotland and Yorkshire. I can still remember the sound of the a horse somewhere behind a steel fence, the hammering from someone I did not see, and the castle-like houses overlooking the sea, beautiful but abandoned. The atmosphere was just... weird.

I am sad to say this coloured my impressions of Anglesey this time, only though I just saw the small port town of Holyhead. I think some of the locals were right in saying that I should revisit it in the summer: I can imagine it must be beautiful with the sun looking out towards the mountain, the dramatic nature must be stunning then. If you are going specifically to Holyhead, I would really recommend you to just stay there over the night - there is not incredibly much to see except the beautiful view of Holyhead mountain from the country park - and then go to Ireland or continue on to some other place on this small Welsh Island. Three days felt like two too much.

From a scale from 1 to 10, this would get a 5. While there are plenty of shops, good accommodation and good transport links, the town did not have many attractions and any walking trips did not feel enjoyable when it was neither sunny nor other tourists around. A walking trip around the whole of island of Anglesey during the Summer would be recommended instead - considering the completion of the Welsh coastal path, it should probably be quite easy . Then this island has plenty of offer in terms of stunning nature and a quiet retreat for a couple of days.

Bad bits: The weather was miserable in January and there is not much to see. Some areas does give off a somewhat seamy vibe. This is a place which just is a resting point before people go on to other places. 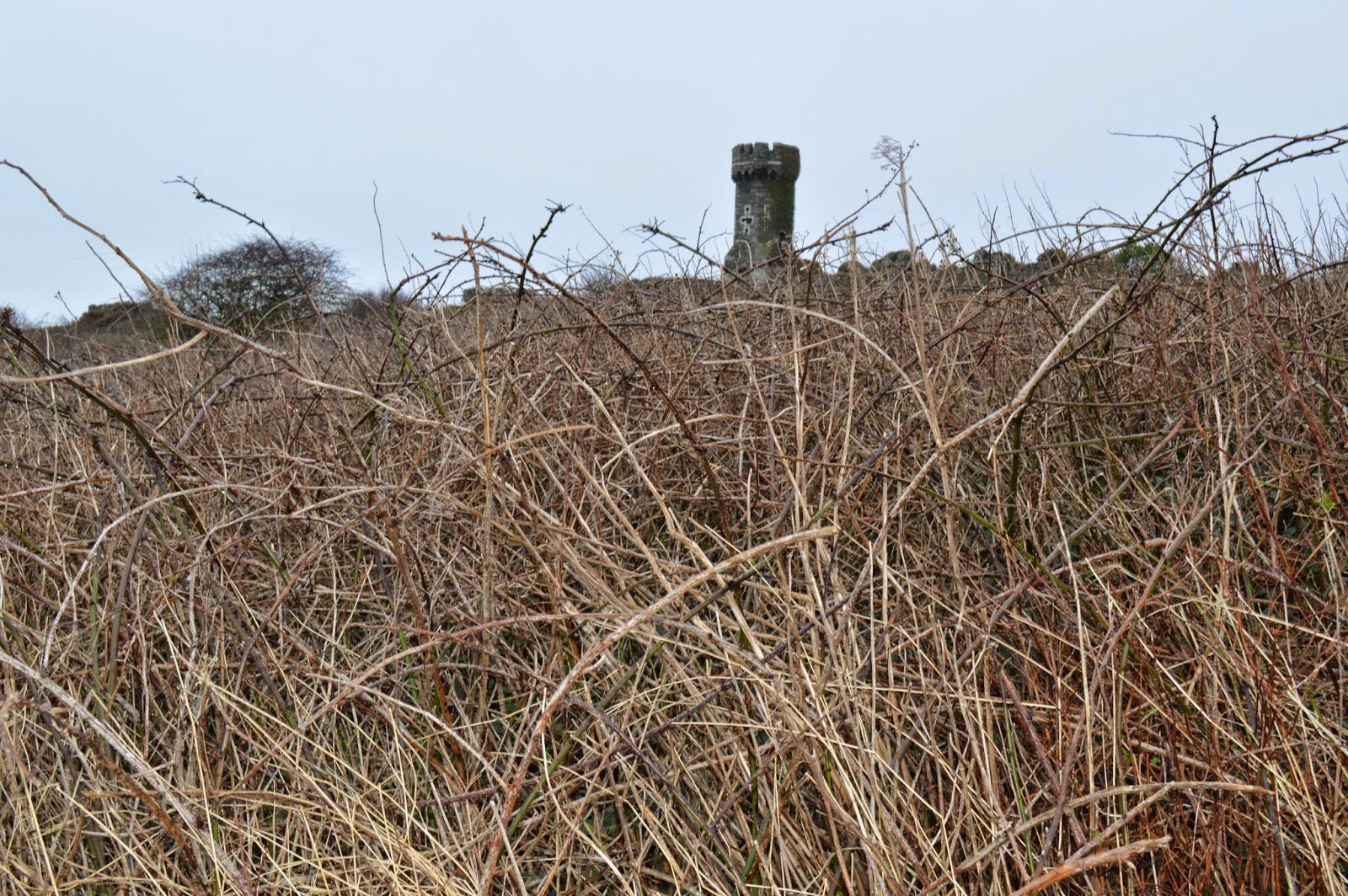 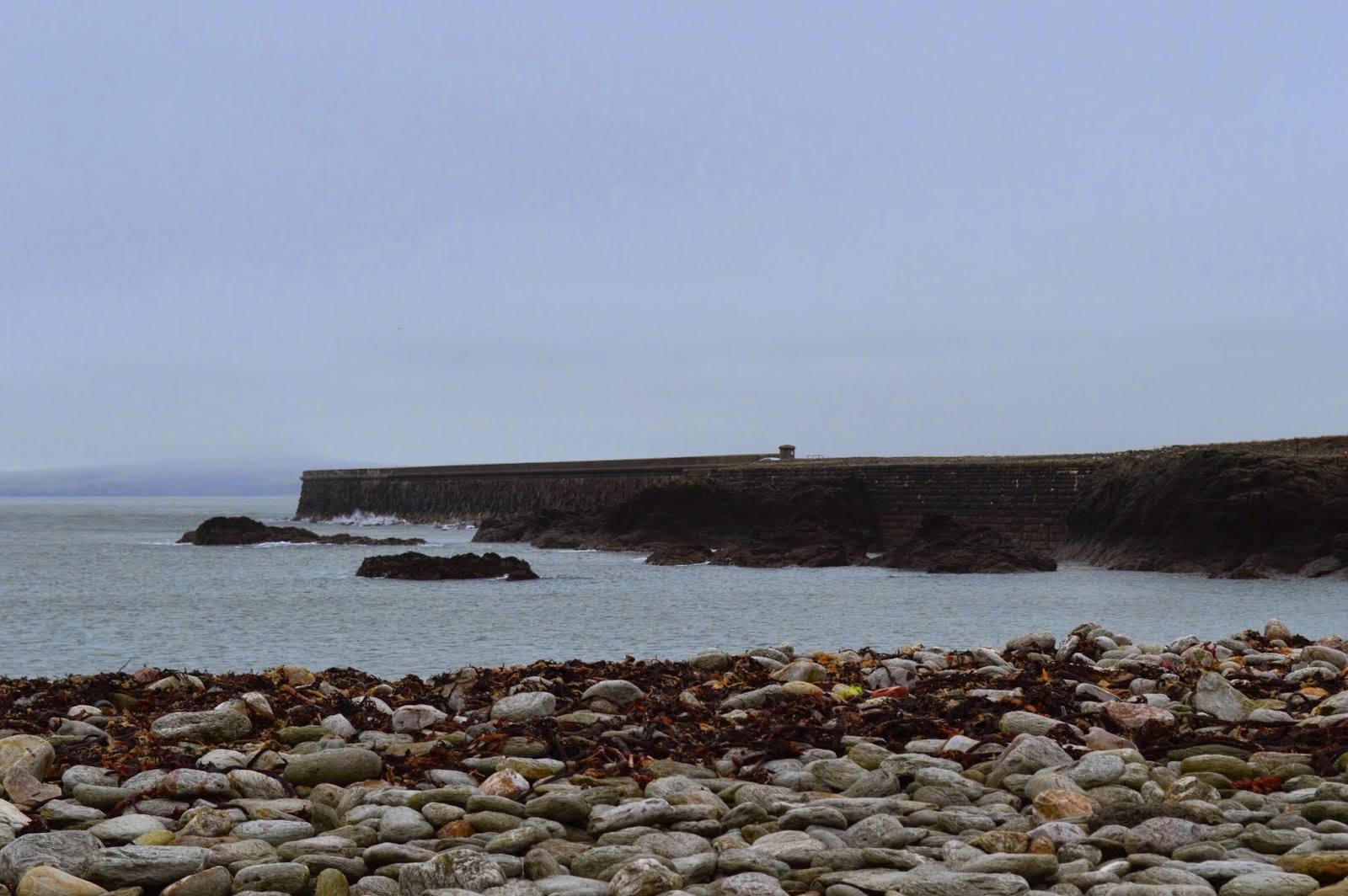 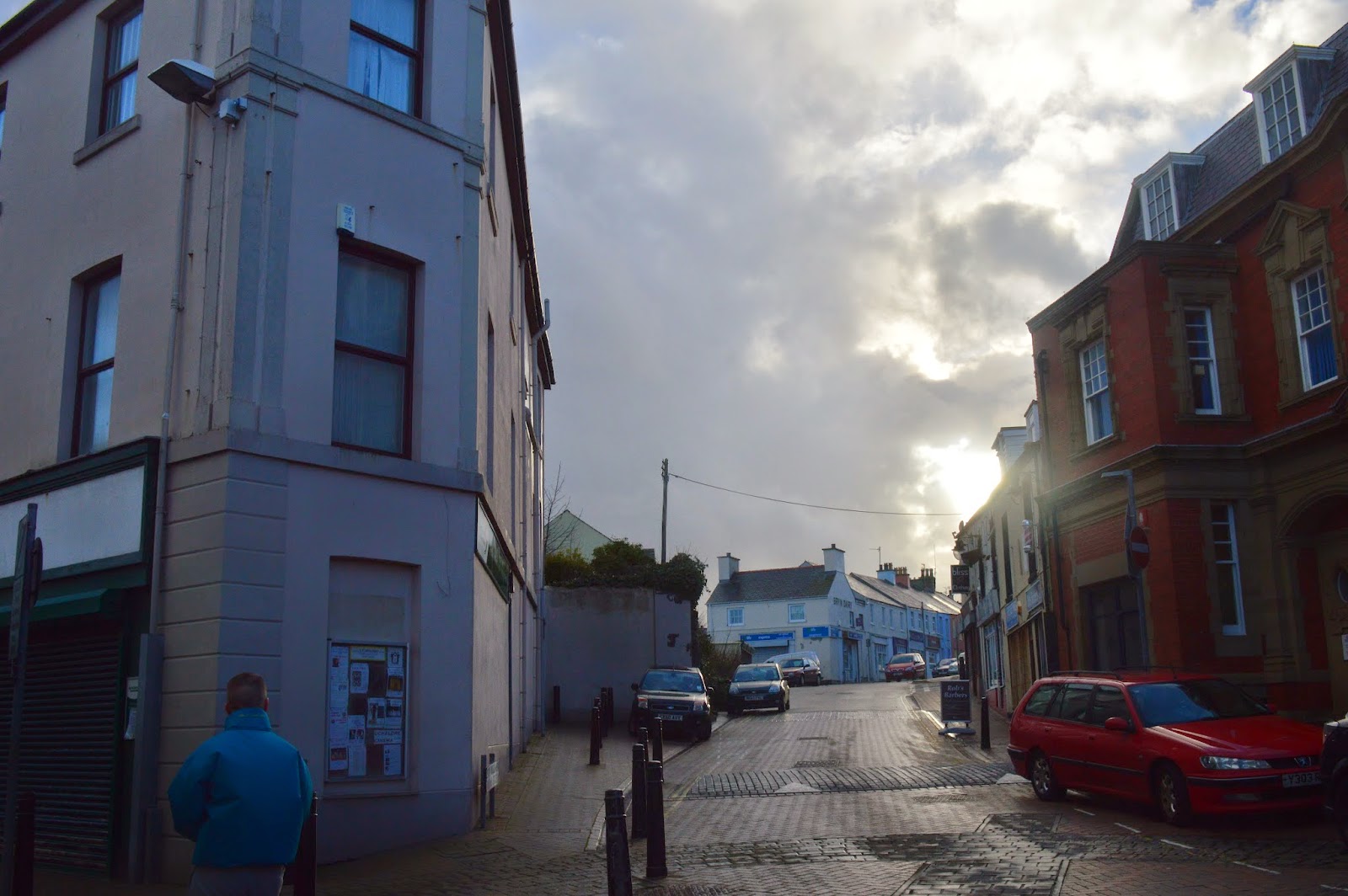 'Life rarely unravels in line with your expectations. And that is a good thing, isn't it?'

What I have now realised when looking over this statement I wrote just half a year ago is that I did not consider that this wholly depend on what your expectations are. Mine are mostly tinted by romantic visions and thus life rarely - but not never - turns out to measure up to my dreams. But that is, as I wrote, a good thing. I even look back at three rain-soaked days in Anglesey (Wales) with happiness. Perhaps this is just memory going romantic on the past, though. There is nothing wrong in being a romantic however - that is what got me travelling in the first place.

Since as long as I remember I have loved most things British - even the weather (I know at this point, most people in the UK must be considering my sanity). I consumed quickly books and TV series that draw you into a world of billowing hills and green dales; of Oxbridge poshness and stiff upper-lips; of kitchen-sink realism and dry humour. I have adored everything fictionally British as long as I can remember, so it was with excitement I moved to England one year ago and started exploring how fiction conformed to reality (well, I mainly came here to study a uni degree). During the year, I have travelled to different places in England, Wales and Scotland and I finally got to see with my own eyes some of those places I had marked with an X when I was a child in my travel books. Meanwhile, I have discovered both a great interest in travelling and photography.

The aim of this blog is therefore to write about my visits to different places in the British Isles. I will both give you tips of where to go and stay, of things to do, anecdotes etc. It will all be accompanied by my amateur photography from the places I've been to. I will need to bring you up to date with the trips I made this year as I have not had time to do so until now. If this will be done in chronological order, I do not know. Furthermore, I will also recommend travel accounts by different authors and documentaries by different film-makers.

I do hope this project will unravel at least to some extent with my expectations. And, if not, I guess it will not be all that bad.

Hannah
I'm a Swedish amateurish traveller and hobby photographer, going on infrequent trips around the UK.